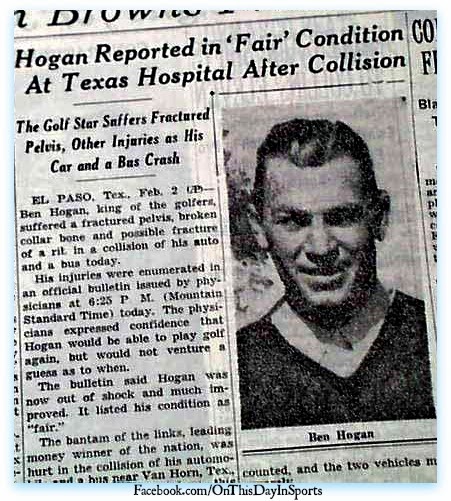 On February 2, 1949, golfing legend Ben Hogan was seriously injured when a bus right outside of  El Paso, Texas was trying to pass a truck and slammed into the '49 Cadillac that he was driving with his wife Valerie by his side. Hogan saw the bus coming and threw himself across his wife in an effort to protect her, if he wouldn't have done so, chances are that he would have perished in the accident as the steering wheel of the automobile punctured the drivers side seat. Hogan suffered a fractured pelvis, a broken collarbone, a fractured ankle, knee damage, and a chipped rib. The devastating injuries would leave him hospitalized for 59 days. However, it was just a speed bump on the road of life as he made a full recovery and made a triumphant return to the PGA tour the following year. 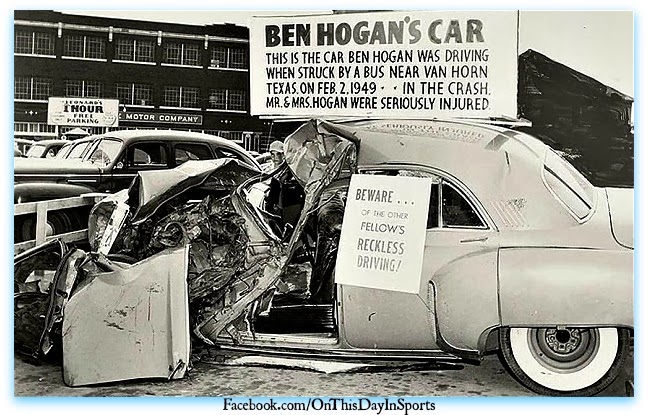 Hogan turned pro in 1930, it took him 10 years to win a tournament and there were times that the financial strain seemed too great to endure. Several times he found himself nearly penniless. With the encouragement of his wife he continued to battle on. After winning his first tournament in 1940, he won two more in a row and looked to have turned a corner. As he steadily rose through the ranks and became one of the top golfers in the world, he would win the PGA Championship in '46, then again in '48. He also took home the top prize at the U.S. Open in '48. Going into 1949, he must of felt on top of the world, that all changed the moment a bus driver made a fateful decision.

The road to recovery was a painstaking process. After multiple surgeries to repair the broken bones a blood clot formed that required an emergency surgery, yet again he had avoided the worst case scenario. After his stay of nearly two months in a hospital bed, he headed home, where he would continue the healing process. He not only returned to the links in 1950, he also won the U.S. Open. 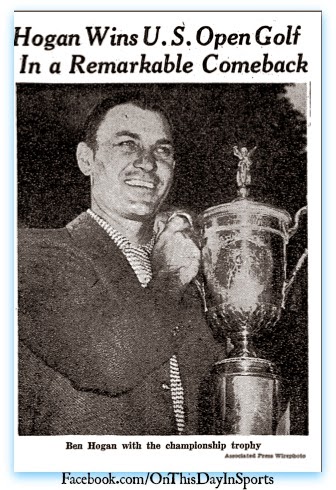 That run to the U.S. Open title has been referred to as "The Miracle at Merion" it came June of 1950, 16 months after the accident. But first he returned to the golf course during the Los Angele Open in January of of that year. While many thought he wouldn't be able to make it through the 72 hour event without wearing down. He defied the odds by hanging in until the end before Sam Snead won the event in a playoff.  With his legs wrapped in bandages from ankle to thigh, Hogan pulled off a victory that will be remembered forever. The Open was guaranteed to be a grueling event for Hogan, the third day of the event was 36 holes and would take everything he had to simply make it to the end, much less be in contention for the title. On the first day a little known golfer named Lee Mackey shot a record setting 64, leaving Hogan was eight shots back. On the second day Hogan made a hard charge at the lead by shooting a 69 that put him just two strokes behind. At the end of the third day, Hogan survived the 36 hole marathon, and was tied with George Fazio and Lloyd Mangrum. One day later he beat them both in a playoff by shooting a 69. The man who had been told just 16 months earlier that he might not ever walk again was once again a champion. It took true determination and will to make that happen.

Hogan played with pain throughout the rest of his life and career. The pain limited him to playing in no more than 7 PGA events a year, but it did not limit his greatness. He won 13 more times, which included six majors. In 1953 alone, he won three majors, which was something that would not be matched until Tiger Woods accomplished the feat in 2000. The accident that seemed like it could have ended a career became a distant memory but the pain that lingered on throughout his life was a constant reminder of how close he had come to death. Over the course of 22 years, Hogan recorded 64 PGA wins which ranks him 4th on the all-time list for wins in a career. Only Sam Snead, Tiger Woods, and Jack Nicklaus sit ahead of him on that list. A true legend in his time, Hogan will always be remembered as one of the greatest to ever swing a golf club. Probably the toughest as well.