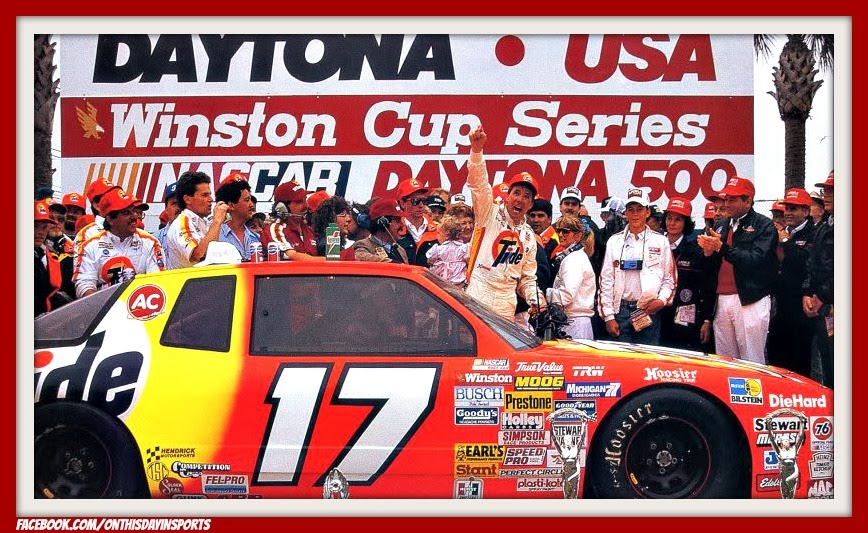 On February 19, 1989, running on fumes, Darrell Waltrip drove his Tide sponsored Chevy Monte Carlo to victory lane at the Daytona 500. With other drivers falling out of contention behind him as they were forced to stop for gas, Waltrip rolled the dice and held on to the win that had evaded him for 17 years.

With four laps to go, Waltrip took over first when the race leader Alan Kulwicki cut a tire. Kulwicki later speculated that he doubt his car would have made it with what little fuel it was living on. Ken Schrader, who had sat in the pole position at the beginning of the day, paired up with Dale Earnhardt and made a hard charge at Waltrip. Both Schrader and Earnhardt decided to stop for a splash of gas, which put Waltrip in a precarious position. His Crew Chief Jeff Hammond advised he pit as well; Waltrip wasn't hearing it. This was his chance at a victory he had only dreamed of. The gamble paid off big the moment his fuel starved car crossed the finish line in first place.

When Waltrip got out of his car in victory lane he grabbed the reporter and screamed "I won the Daytona 500!!! I won the Daytona 500!!!" Then jokingly asked "This is the Daytona 500 isn't it? I'm not dreaming am I?" He wasn't dreaming. He had finally won the big race. The announcers and drivers alike were anxious to see if any "modifications" had been made to the gas tank. The car passed inspection with flying colors and when the inspector was asked how much fuel was left in the tank he said "For five dollars I'd drink it." Waltrip simply left it all out there literally and figuratively and for that he took home one of most coveted prizes in NASCAR.