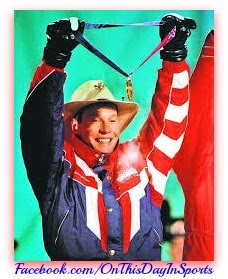 On February 13, 1994, American skier Tommy Moe took the Gold medal in the men's downhill in Lillehammer, Norway. It gave the U.S. their first Olympic medal in alpine skiing since the '84 games. 5 days later Moe celebrated his 24th birthday by winning the silver medal in the Super G a.k.a the Super Giant Slalom, making him the first American male skier to win two medals in a single winter Olympics.

Moe was said to had skied the downhill event of a lifetime as he beat out the local favorite, Norwegian, Kjetil Andre Aamodt by just four one hundredths of a second, which made it the closest race in Olympic history. Moe, who called Alaska home at the time, said "I can't believe I skied that well." just moments before shaking the hand of Hillary Clinton. Moe was the newest American hero.

Moe's girlfriend and future wife Meghan Gerety learned of the victory while she was practicing for her own event. The night before she offered these words of encouragement "Just go out there and ski the way you want to. Don't put pressure on yourself." He most definitely skied the way he wanted to. There were 40,000+ on hand to watch the event. The majority of those 40,000 were hoping to see Aamodt secure the victory. When Moe hit the first intermediate he was two-tenths of a  second slower than Aamodt's time. Moe found an extra gear and attacked every turn with strength and precision as he caught up with his competitor's. The cheers of the crowd  turned to a murmur as they were stunned when Moe surpassed the Norwegian's time, then flew across the finish line in first place. 47 more challengers attempted to beat Moe's time, but none could top the Gold Medal effort.