February 3, 1980: Gervin Shines While Bird Drops The First Three Pointer In The History Of The NBA All Star Game 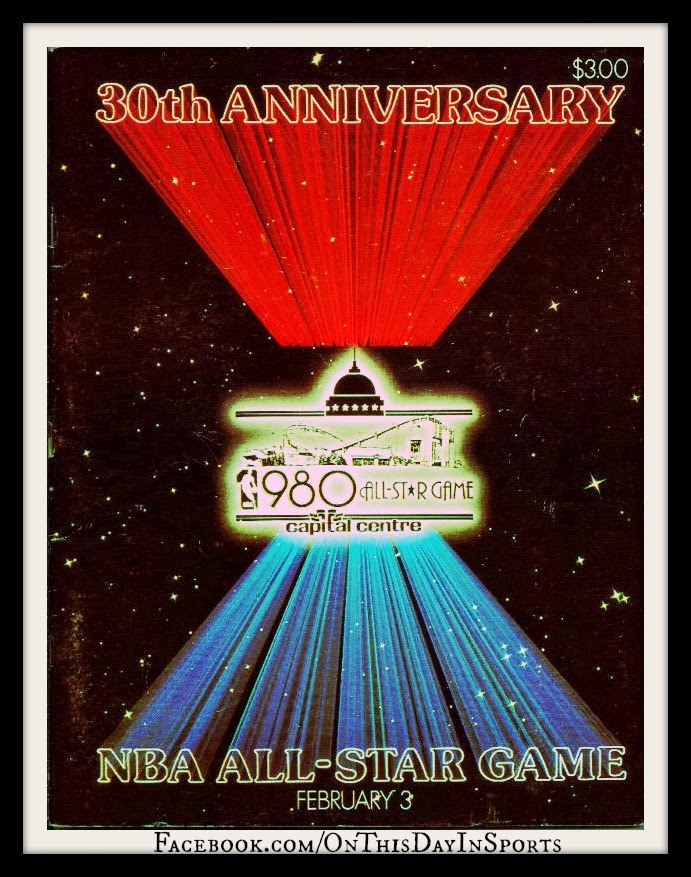 On February 3, 1980, the East took down the West with a 144-136 overtime victory in the NBA All Star game at the Capital Centre in Landover, Maryland. The game featured Magic Johnson who became the youngest player to be selected to the game at 20 years and 5 months. Another kid who found himself in the game was Boston's rookie Larry Bird, the 23 year-old became the first player in NBA history to score a 3-pointer in an All Star game when he drained one from behind the arc with 1 minute and forty seconds to go in the overtime period. San Antonio Spurs star big man George "The Iceman" Gervin provided the majority of the offense for the East with a 34 point performance. The West was led by Utah Jazz standout Adrian Dantley with a 23 point effort.

The game was an entertaining one from beginning to end. In typical All Star game fashion the defense was almost non-existent, while the offensive units put on a show. An excited Gervin proclaimed "It was my kind of game." Gervin was on his way to a third consecutive scoring title at the time and showed off his talents in front of more than just a stadium full of fans and a nationwide audience, he impressed his peers as well.

The West jumped out to a 37-28 lead in the first, before the East made a hard charge to tie it up 64-64 as the two squads headed to the locker rooms at the half. In the second half the East came out with a simple yet effective game plan. Their head coach, Billy Cunningham, who also led the Philadelphia 76ers, instituted three plays in the first half that seemed to restrict his players from success, in the second half he opened up a passing game that led to a much more fluid squad, who outpaced the West 44-27 in the 3rd quarter that put the East ahead 108-91. After Cunningham found a strategy that seem to out control in the hands of the East, the head coach of the West, Lenny Wilkens had a trick up his sleeve as well. Wilkens, who led the Seattle Supersonics during the regular season called on one of his own stars Jack Sikma to pair up with Lakers star Kareem Abdul-Jabar. It was a game changer as the West came storming back into it and slowly but surely the 17 point deficit was erased. Phoenix Suns guard Paul Westphal was key member in the comeback as he was the one who dropped the shot that tied the contest at 122 all, then tied it up again at 128 with just 17 seconds to go in regulation, which sent the game to overtime. While Utah's Dantley outscored him, Westphal's 21 points were key in giving the West a shot to win.

Before the overtime began, Bird had just 2 points on his portion of the scorecard, then dropped 5 in the overtime which included the historic 3 point shot. Bird also picked up an assist when he slapped the ball directly into Gervin's hands for the last points of the ballgame. Gervin's 14 of 26 performance that included 10 rebounds, 3 assists, and 3 steals earned him MVP honors as the West walked away with bragging rights.

Sidenote; The record for youngest player to make the NBA All Star game has since been surpassed. That distinction now belongs to Kobe Bryant who was just 19 years and 5 months old when he made his first appearance in the contest.
Posted by Wade Forrester at 12:36 AM