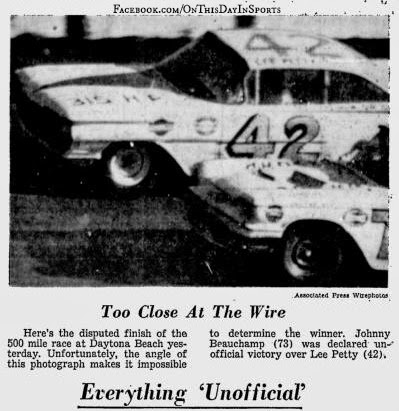 On February 22, 1959, the inaugural Daytona 500 was held. More than 40,000 packed the stands to witness the historic event that would eventually become one of the grandest racing events in all of motorsports. Those 40,000 souls witnessed a classic photo finish. When they left the track each of them thought that Johnny Beauchamp had driven his '59 T-Bird to victory. Then came a stunning development. A photographer stepped out of the woodwork and said that he had a photo that might prove Lee Petty's Oldsmobile crossed the line before Beauchamp and his Ford. The inaugural event kicked off with instant controversy that would take three days to sort out. After those three days, Lee Petty was determined to be the winner.

Once the photo came to the attention of Bill France the head of NASCAR,  he immediately contacted Andy Anderson who recorded the event. After reviewing the film France and company felt the footage was inconclusive and name Beauchamp the unofficial champion. In the meantime, France put out a call for any amateur photographers that might have taken a photo that would help them come to a conclusion. Both drivers proclaimed they had won it while they waited for the official winner to be named. The difference between first and second was a big one. The first place prize $17,900 while second took home just $6,900. By today's standards that would be the difference between $144,000 and $55,000. You could bet your ass that they each were hoping for the top prize. After viewing a national newsreel, along with some more photos that came to the attention of France the original decision was overturned. Lee Petty was the victor.

One helluva way to kick off what has become one of the biggest events in the world of motorsports. 55 years later another driver hopes to add his name to the list that starts with the name Lee Petty. Check out the list here: http://en.wikipedia.org/wiki/Daytona_500#List_of_Daytona_500_winner
Posted by Wade Forrester at 3:04 AM