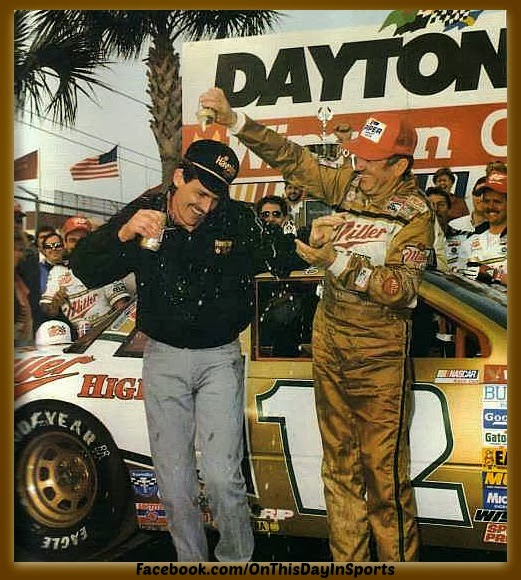 On February 14, 1988, Bobby Allison took the checkered flag in dramatic fashion at the Daytona 500, as he held off his son Davey who made a late charge at the top prize. The 50-year-old Allison became the oldest driver to win a 500 mile race, and is still the oldest driver to win that event. It was the first time since 1960 that a father-son duo finished 1-2, the last time that had been accomplished was at the Heidelburg Raceway when Lee Petty held off his son Richard for a victory.

Allison had won the Busch Grand National race one day earlier, and before that he had taken the checkered flag in his 125-mile qualifier. He then capped it off with  a victory that will go down in NASCAR history. The race had 7 cautions, the lead changed hands 26 times among 12 drivers. Bobby Allison drove his Buick Regal into the lead by passing Darrell Waltrip with 18 laps to go then kept the hammer down until the checkered flag waved. His son Davey did everything he could to pass his father, most notably was an attempt to pass him on the final turn on the final lap, his dad still beat him by 2 1/2 car lengths. After the checker flag waved, Bobby jumped on the radio and acknowledged that his old man's car was just too strong. It was the third time that Bobby celebrated in victory lane following the Daytona 500, Davey would have to wait until 1992 to have his own party in victory lane after the famous race.

The '88 Daytona 500 marked the first time that a restrictor plate would be introduced for safety reasons. Because of the restrictor plate Bobby Allison averaged 137.531 miles per hour, at the time it was the third slowest average in Daytona 500 history. Another reason why his average was held back was 7 caution flag flew, which included a violent wreck that involved The King Richard Petty. It happened on the 106th lap when Phil Barkdoll made contact with him. After skidding out of control, Petty's car went airborne and flipped seven times before coming to a rest. Petty was taken to a hospital for observation then released.

Later in that 1988 season, Bobby suffered massive head injuries after wrecking his car at Pocono. The injuries would lead to memory loss and ended his career behind the wheel. In '92 his son Clifford was killed while practicing at Michigan, then in '93 he lost Davey in a helicopter crash at the Talladega Superspeedway. Just last year The Sporting News published an article that was about Allison's struggle to remember the race. Quite frankly, it's heartbreaking. While the career of Bobby Allison did not have a storybook ending, it is a career to be admired. He won 84 races, took the pole position 58 times, and finished in the top ten 446 times. The win at Daytona was the final win of his career. The picture of him celebrating with his son is a powerful one, as it shows the pure the joy and jubilation each of them had during that moment in the sun.

You can read the aforementioned article here: http://www.sportingnews.com/nascar/story/2013-02-18/daytona-500-bobby-allison-1988-win-davey-memory-loss-crash-tragedy