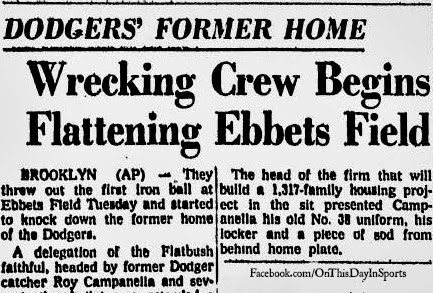 On February 23, 1960, an end of a baseball era began as a wrecking ball began the deconstruction of Ebbets Field, the famed home of the Brooklyn Dodgers. The ballpark had been empty since the Dodgers headed to L.A. after the '57 season and after realizing no other major league clubs were interested in moving to Brooklyn, plans were made to develop the site into a $22 million housing complex. In the eyes of many, the ballpark was an old friend that they hated to see go. A small crowd of Dodger faithful were joined by former catcher Roy Campanella who had caught the last game at the ole ballpark on September 24, 1957. Campanella who had been confined to a wheelchair after a car accident two years earlier was joined by a 70-year-old Otto Miller who had caught the first game for the club at Ebbets on April 9, 1913. After a short ceremony in which Campanella took dirt from behind home plate, a wrecking ball that was painted like a baseball began to swing. The baseball cathedral was coming down. 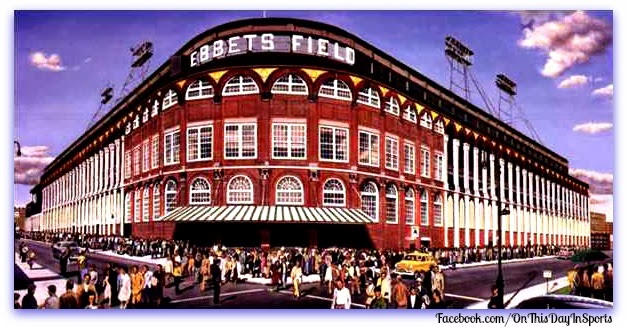 The Dodgers time in Brooklyn was like a love affair between the team and the fans. They had suffered through many lean years then would rise to the top of the National League. From 1941 to 1953 "Those Bums" from Brooklyn took on the moniker "wait til next year" as they could not seemed to win the World Series. That all changed in '55 as they brought the glory of a title to the fans that had loved them through it all.

Men like Zack Wheat, Dazzy Vance, Babe Herman, Max Carey, Dixie Walker , Pee Wee Reese, Jackie Robinson, along with a multitude of other players played ball in the ballpark that the Dodgers called home for 44 years. Memories were made, hearts were broken, and thousands upon thousands of fans found great joy as they watched the Dodgers play ball there. In many of the newspapers of the day, the articles about the demolition read much like an obituary of an old friend. In the eyes of many, the ballpark was an old friend that they hated to see go. It took 10 weeks for the demolition to be completed. At the end of those 10 weeks, the place that had celebrated 9 National League Pennants and a World Series title was gone, but the stories from that old ballpark would be told for generations to come.

While doing some research about Ebbets Field I ran across this article in the Nevada Daily Mail  it was published on September 25, 1987. It's a great piece that reflects on Ebbets Field with a lot of great quotes from the legendary Vin Scully. Take a look at it here: http://news.google.com/newspapers?id=uzUrAAAAIBAJ&sjid=d9UEAAAAIBAJ&pg=1302%2C6719312

Here is a great video about the ballpark from yesteryear. https://www.youtube.com/watch?v=FJMCa-8Teb4
Posted by Wade Forrester at 1:51 AM