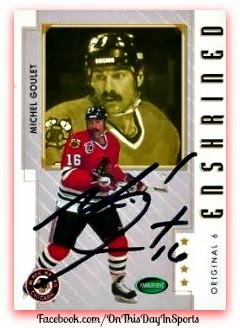 On February 16, 1992, Chicago Blackhawks winger Michel Goulet became the 17th player in NHl history to score 500 goals in his career. The historic goal came on a breakaway during the first period of a 5-5 tie against the Calgary Flames on his home ice in Chicago. Goulet finished his career with 548 goals and scored more than a 1,000 points as he forged a career that would end with a Hall of Fame induction. To date, only 42 players have scored 500 goals wearing an NHL sweater.

Dirk Graham got the scoring started for the Hawks with a powerplay goal just two minutes and fifteen seconds into the game. Calgary defenseman Frantisek Musil evened things up with a little more than three minutes to go in the period. Minutes later Goulet made history. His goal came with 37 seconds left in the frame and it was a thing of beauty, he took a quick pass from Steve Larmer, then found nothin but open ice in front of him. The only man he had to beat was the Calgary netminder Jeff Reese. Goulet faked him out of his pads, and fired the puck right past him. It was a memorable moment not just for his teammates, but for all 18,472 in attendance as well; they had just a truly historic moment.

In the second period Calgary lit the lamp three times and Chicago was only able tally one in the frame. The Hawks trailed 4-3 going into the third. Three minutes and four seconds into the period Tony Horacek scored an equalizer for the Hawks, four minutes later Bryan Marchment put them in front with a goal that was setup by Horacek and Jeremy Roenick. It looked like the Hawks were going to hold onto win the contest 5-4, then watched it slip away with just one minute and twelve seconds to go in regulation as Calgary winger Gary Roberts fired one past Ed Belfour. After each goalie held their own in the overtime period each team would have to settle for a tie. It was a hard fought battle that would be remembered most for Goulet's historic goal. 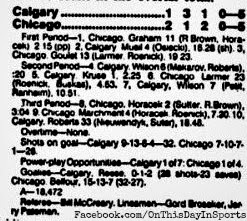 The Hall of Fame career of Michel Goulet began with the Quebec Nordiques when he was a 19-year-old kid. He lit the lamp 32 times in his rookie season, and would quickly prove to be one of the best young stars in the league. Goulet scored 50 goals during '82-'83 campaign, which would be the first of four consecutive seasons with 50 goals. With the Nordiques in a rebuild mode after a more than disappointing '89-'90 season Goulet was shipped to Chicago where he continued his march toward the Hall of Fame. He helped them reach the Stanley Cup Finals in 1992, but fell to the Pittsburgh Penguins.

In March of '94, the Hawks were playing the Canadiens in Montreal. Goulet was seriously injured in what looked like a routine play. He fell against the boards, hitting his head, which resulted in a severe concussion. It would ultimately end the career of the 33-year-old. It was a moment in which suddenly the game meant nothing, as he was hauled from the ice on a stretcher. He had to go through a painstaking process of recovery before taking his doctor's advice to retire from the game. The five time All Star, spent 15 years on the ice and had many great moments. He never did win The Cup as a player, but was a part of two Stanley Cup Championship teams as a member of the front office of Colorado Avalanche in 1996 and 2001. One of his greatest moments was that night he scored his 500th goal. In The Legends of Hockey video that will be posted below, Goulet reflects on how similar it was to one of his childhood heroes 500th goal. That hero was Jean Beliveau, and when you watch each of the men score their 500th you will see what he was talking about. He called that night "something special," it truly was something special.

And, here is the link to the Legends of Hockey - Michel Goulet video: https://www.youtube.com/watch?v=wPzg2oDgEqQ
Posted by Wade Forrester at 2:22 AM