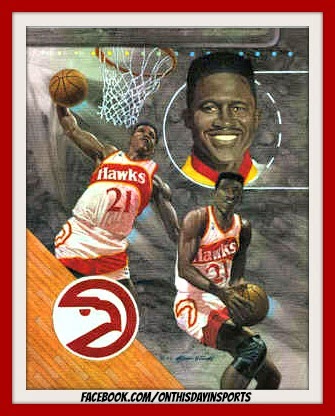 On January 31, 1994, with a 24 point effort in a 90-85 win over the Dallas Mavericks, Atlanta Hawks star Dominique Wilkins became just the 11th player in NBA history to record 24,000 points in his career. Coincidentally Wilkins would score his 26,000th point on the same date in 1997 as a member of the San Antonio Spurs, unfortunately the 27 points he dropped that night didn't lead to a win as the Minnesota Timberwolves went onto win that contest 97-95. Wilkins would finish his career with 26,668 points which is good for 11th on the all time list of points scored in NBA history.

The night that his 23,000th point fell through the hoop was a memorable one as the Hawks had found themselves trailing 43-37 at the half. At the time the Mavs had a record of 3 wins and 40 losses and Wilkins a.k.a. "The Human Highlight Film"  even acknowledged that they were taking them lightly. It is always important to throw records out the window because any team that lacks focus can be beaten by a team that they consider to be inferior. The first half was fuel for a Hawks fire that would use Wilkins as the primary accelerant. In his own words, the 6 foot 8 big man said "We came in for the second half pretty mad." It was the kind of anger that works in your favor.

The Hawks outpaced the Mavs 36-19 in the third quarter which decided the ballgame. 14 of Wilkins' 24 points came in that third quarter. His 23,000th point came with a dunk as the Hawks were in the midst of a 22-8 run. While the Mavs record didn't show it, they played with heart and determination to get back in it. They were down 73-62 after 3 quarters were in the books then outscored Atlanta 23-17 in the final frame. It just wasn't enough to overcome the third quarter that buried them.

As mentioned before Wilkins finished his career with 26,668 points which is good for 11th on the all time list of points scored in NBA history. The 9 time All Star was inducted into the Naismith Basketball Hall of Fame in 2006. The accomplishments of Wilkins also included a scoring title and 2 slam dunk titles. In 2001, the Hawks organization retired his #21 to honor him as one of the greatest to ever wear their jersey.

Check out Wilkins' career numbers and accomplishments here: http://www.basketball-reference.com/players/w/wilkido01.html
Posted by Wade Forrester at 1:48 AM