February 8, 1942: Baseball and a Breakout at Folsom Prison 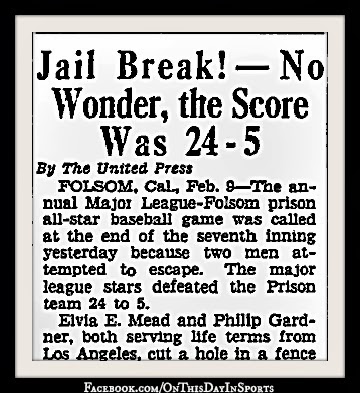 On February 8, 1942, a group of major league baseball players that included Ernie Lombardi, Gus Suhr, Joe Marty, Johnny Babich, and Ernie Bonham traveled to Folsom Prison for an annual contest against the prison's baseball team. In the seventh inning, with the prison team down 24-5, two inmates decided they were done watching the game and made a break for it. The game was immediately suspended and a manhunt was on.

The inmates: Elvia E. Mead and Philip Gardner cut a hole through a fence while the game was being played and swam down the American River for nearly three hours before they were caught. Both men were serving life terms. Mead for murder and Gardner for burglary. With the men back behind bars, the day would be remembered for much more than a baseball game.

As I looked into this, I thought this might have been the last game the prison squad would get to play against the major leaguers. That was not the case. In fact, the following spring the prison squad knocked the major leaguers off 6-4. I was able to find a game between the two squads as late as 1951, and as early as 1913. One thing I found funny while I researched this was an article that was published in the Sporting News in 1943, it was basically an ad for a catcher convict, that had told sheriff's all around to keep their eyes peeled for one and if they found a guy to contact the prison. Some pretty wild stuff.

In a place where hope and joy would seem hard to come by, a simple game would bring both to the men that had found themselves in prison for a variety of reasons. I'm sure a great deal of those men looked forward to those games more than anything else as a life behind bars would be a bleak thing to have in front of a person. The men who played enjoyed these games and the men who simply sat and watched enjoyed them as well. They played every weekend and on many holidays as well, on each of those days, for a few hours at least, they were simply enjoying the game that is played on the diamond. None of the games that were played will ever have the notoriety that the escape of '42 had, but I would imagine each of them came with a lot of great highlights and smiling faces as they enjoyed a game they loved.

Ladies and Gentleman I now present to you Mr. Johnny Cash: https://www.youtube.com/watch?v=bDktBZzQIiU

Posted by Wade Forrester at 2:19 AM