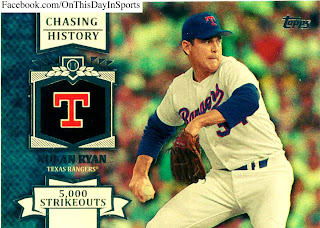 On August 22, 1989, at Arlington Stadium in Texas, Nolan Ryan struck out his 5,000th batter of his career in a 2-0 loss to the Oakland A's . No player had ever reached the plateau and no player has reached it since. Ryan came into the contest just 6 strikeouts away from the historic milestone, and he went to work on reaching the mark immediately. He struck out Jose Canseco in the first, Dave Henderson and Tony Phillips in the second, and Rickey Henderson and Ron Hassey in the third. Which put him just one strikeout away from the historic milestone. The moment came in the fifth inning and Rickey Henderson was the victim. Henderson fouled off the first two pitches he saw before he swung and missed the third pitch. The crowd of 42,869 stood and cheered for more than a minute while his catcher rookie Chad Kreuter ran the ball out to him while his teammates surrounded him at the mound. Ryan tipped his cap and went back to work. As the cheers were still coming down from the stands Carney Lansford singled then scored after center fielder Cecil Espy committed an error on a Jose Canseco flyball. At that point the Rangers were down 2-0 and they couldn't muster the offense to reward the future Hall of Famer with a W. At the end of the day the 42 year old Ryan had struck out 13 men, his career strikeout total sat at 5,007, and there were quite a few more on the way. Ryan finished his career with 5,714 strikeouts which is 839 more than Randy Johnson who sits behind The Ryan Express on the all time list.