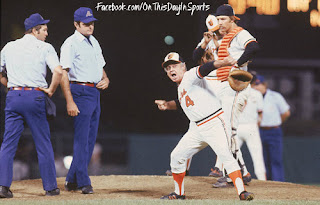 On August 15, 1975, Orioles skipper Earl Weaver was ejected by umpire Ron Luciano in both games of a doubleheader at Memorial Stadium in Baltimore. The first ejection came in the fourth inning, with his Orioles already down 6-0 Luciano reversed an out call after realizing that the first baseman Tony Muser didn't step on first when he was attempting to turn a double play. It set the manager off and the umpire tossed him after a verbal assault by the always fiery skipper. The Rangers went onto win the contest 10-6 behind a 4 rbi performance by Tom Grieve. Ole Earl didn't even get to see the players take the field in the second  game. As the skipper was handing over his lineup card before the game he let Luciano know that he thought he had a personal vendetta against him and he thought it was bullshit. Next thing you know Earl was on his way back to the locker room after Luciano tossed him for the second time that day. The Orioles responded with 18 hits in a 13-1 win over the Rangers. Doug DeCinces led the O's attack with a two run shot in the fifth, and a bases loaded triple in the sixth. DeCinces finished the day with 5 ribbies as the Orioles pounded the Rangers. When interviewed, Weaver insisted the ump had it out for him, he pointed out 5 separate times that he had made bad calls against his club. Naturally, Luciano denied the allegations, he said he called it the way he seen it and when Earl would not stop voicing his displeasure before the second game even began he had to toss him. Weaver was ejected from 91 games in his Hall of Fame career, three times he got tossed from both games of a doubleheader. It's safe to say that there was a bit of bad blood between him and Luciano, the umpire kicked him out of four games in the minors and eight games in the majors. While Earl could get fired up and booted out of a game in the blink of an eye, he was a winner that compiled 1,480 wins as a big league manager. He helped lead the Orioles to the top of the American League four times and won a World Series title in 1970.