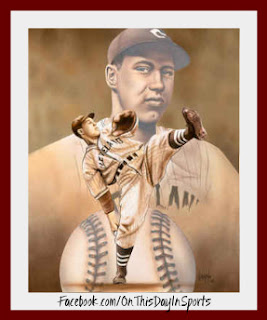 On August 23, 1936, a 17 year old kid by the name of Bob Feller made his first major league start for the Cleveland Indians. The rookie pitcher out of Van Meter, Iowa had made several appearances in relief before he got the chance to start against the St. Louis Browns at League Park in Cleveland. To say the debut was impressive would be one of the biggest understatements ever made. Feller mowed down the Browns batters, he scattered 6 hits and struck out 15 as Cleveland cruised to 4-1 win. He fell behind briefly when Lyn Lary and Roy Bell put back to back doubles together in the sixth to put the Browns up 1-0, then his team came out swinging in the bottom of the sixth and tacked 3 runs on the board. They followed that up with another run in the seventh. Hal Trosky led the Cleveland offense with a 4 for 4 performance which included two ribbies. At the time, Feller's strikeout total was just two short of Dizzy Dean's major league record that was set in '33, and just one shy of Rube Wadell's American League record that was set in 1908. Feller was more than a baseball player, he was the first athlete to enlist after the bombing of Pearl Harbor and he sacrificed 3 years of his career to serve in the Navy. When it was all said and done, Feller won 266 games and he struck out 2,581 batters. The 8 time All Star and World Series Champ, led the American League in strikeouts 7 times and in wins 6 times. He was well respected by his peers, Ted Williams called him the fastest he had ever seen and Stan Musial believed he was the greatest pitcher of their era. Feller pitched all 18 years of his career in Cleveland, he pitched his last game in September of '56, the following season the organization retired his number 19. He was the first Indians player to bestowed the honor. In 1962, Feller was inducted into the Baseball Hall of Fame, it was his first time on the ballot. He had come a long way from that start in 1936.

The artwork was done by Gary Longordo, check out his Facebook page: https://www.facebook.com/garylongordo
Posted by Wade Forrester at 12:53 AM