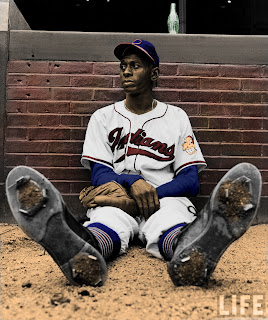 On August 3, 1948, more than 70,000 fans in Cleveland witnessed Satchel Paige make his first major league start  as his Indians took on the Washington Senators. The 42 year old Paige gave up two runs in the first then settled down and gave the Indians seven strong innings while striking out 6 Senators. When Paige left the game the Indians held a 4-2 lead and would end up holding onto win it 5-3 giving the Negro League legend his second major league win. Paige became the oldest man to ever make his big league debut on the 9th of July then on the 15th of July he picked up his first major league win in relief. Paige pitched several games in relief before he finally got a start, the start came with a lot on the line as the Indians were just one game back in the race and Paige did not disappoint as he helped lead the team to victory. Paige finished the '48 season with a 6-1 record, each of those wins were crucial as the Indians ended the season tied with the Boston Red Sox atop the American League. The Indians knocked off the Sox in one game playoff and would take on the Boston Braves in the Fall Classic. The Indians took down the Braves in six games. When Paige made an appearance in Game 5 he became the first African American to take the mound in the Fall Classic. He only pitched two thirds of an inning in the series but there is a good chance they wouldn't have been there without his contributions. Paige pitched for the Indians for two seasons before spending 3 seasons with the St. Louis Browns. He did return to the hill in 1965 as a member of the Kansas City A's, the 59 year old Paige pitched 3 innings and gave up one hit in the lone appearance. To this day he is the oldest to make his debut and the oldest player to play in Major League Baseball. While Paige's record in the majors was just 28-31, he had made his true mark in the sport in the Negro Leagues, with 5 All Star appearances and a Negro League World Series Title in 1942. In 1971, Paige became the first African American to be inducted into The Baseball Hall of Fame, it was well deserved for a man that gave his life to the sport. The Negro League stats aren't readily available which makes it hard to say what his exact numbers were before he reached the majors. In 1961, Paige estimated he had taken the mound 2,500 times, won 2,000 games and had thrown more than a 100 no hitters. There is one thing that we can say without a doubt, he was a legend in his time and his legend still lives on today.

Here's the box score from Satch's first start in the majors: http://www.baseball-reference.com/boxes/CLE/CLE194808030.shtml