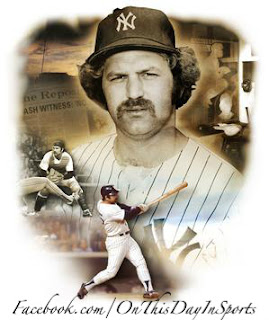 On August 2, 1979, Thurman Munson lost his life after crashing his plane at the Akron-Canton Airport in Green, Ohio. The 32 year old Yankees Captain had taken flying lessons over the last two years and was practicing landing in a Cessna he had recently purchased, in his third attempt at landing Munson's plane clipped some trees just short of the runway and crashed 870 feet short of the runway. The plane burst into flames upon impact, the two passengers Munson had on board were able to escape the fiery wreckage but couldn't get close enough to the plane to try and save Munson's life due to the intense heat. Munson broke his neck during the crash and would have most likely been quadriplegic if he would have survived. At the time of the accident The Yankees catcher was a 10 year veteran who had a .292 career average, he had topped the .300 mark 5 times.  He had taken home American League Rookie of the Year honors in 1970 and the league MVP award in 1976. The 7 time All Star and 3 time Gold Glover had helped lead the Yankees to three American League Pennants and two World Series championships. Following his death George Steinbrenner retired his #15 immediately. In September of 1980 Munson joined the rest of the Yankees immortals with a plaque in Monument Park, these words are on that plaque; Our captain and leader has not left us today, tomorrow, or the next day... Our endeavors will reflect our admiration for him. Those same words composed by Steinbrenner had flashed in the scoreboard at Yankee Stadium the day after he lost his life. The game that followed the passing of Munson was against the Orioles in the Bronx, the team honored their fallen comrade by having all their starters stand at their respective positions while the catcher position remained vacant, following a prayer and a rendition of America The Beautiful the crowd of more than 50,000 gave a standing ovation that was eight minutes long, following the ovation the stadium announcer Bob Sheperd said "Thank you ladies and gentleman, thank you for your wonderful response."  The Yankees took the field without their captain and ended up losing to the Orioles which in the end just didn't matter as they had lost one of their own. While today is a sad anniversary of one of the greats losing his life, it is also a day to celebrate the life he lived. It was a great one.

This video tells the story quite well: http://www.youtube.com/watch?v=8xJDZ0dDilc