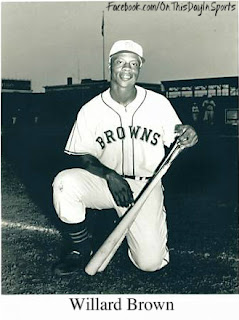 On August 13, 1947, Willard "Home Run" Brown of the St. Louis Browns became the first African American to hit a home run in American League history when he hit an eighth inning game tying home run off of Detroit Tigers hurler and future Hall of Famer Hal Newhouser. The big blast was a two run shot that tied the ballgame up at 5. Things didn't get any better for the Tigers, a few batters later a passed ball put the Browns ahead 6-5. It was a lead they would not relinquish.  The man they called Home Run Brown only played 21 games with the Browns and that home run was the only one he ever hit with in the majors. By the time he reached the majors Brown's best days were passed him, he hit just .179 as a member of the Browns before his days in Major League Baseball came to an end. In his heydey Brown was said to have had the speed of a leopard and power that could only be matched by the great Josh Gibson. The native of Shreveport, Louisiana won ten home run titles and four batting titles in his time in the Negro League's. His career spanned from 1935 to 1956, he not only made a mark in the Negro Leagues and the Major Leagues, he also became a star in Puerto Rico where he would win the triple crown in 1950. His career in the majors might have been short but his impact on the game did not go unnoticed, in February of 2006 Brown was recognized as one of the best to ever step on a ballfield when he was inducted into the Baseball Hall of Fame in Cooperstown, New York.