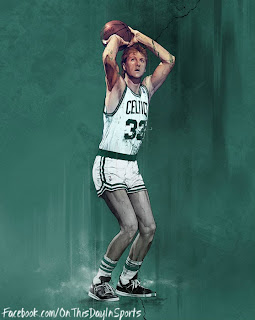 On August 18, 1992, Celtics legend Larry Bird announced that he would be retiring. Bird had just won a Gold Medal as a member of the Dream Team in the '92 Olympics and he realized that his body was no longer going to hold up to the rigors of the NBA. Bird had been hampered by chronic back issues for more than two years which led to the decision. Bird spent all 13 years of his career with the Celtics, he played in 897 games scoring 21,971 points which averaged out 24.3 points per game, along with  10 rebounds per game, and 6.3 assists per game. He also shot .496 from the field, .376 from three point land, and was money at the free throw line as he carried an .886 free throw percentage. He won his first title in 1981, his second in 1984, then the third and final title of his career in 1986. He took home three NBA titles over the course of his legendary career but like all great players Father Time came knocking to let him know he wasn't the young man he once was. At his press conference Larry said "I don't know where I'm at" when it came to his role in basketball history. "It doesn't really matter. I just know that I played against some of the best players in the world and I did pretty fair against them." He was choked up at times but no tears flowed as he said goodbye to the game that he knew and loved. He did say "When I played, I played as hard as I could. That's what I want to be remembered for." There is no doubt he is remembered for that as he is one of the greatest to ever pick up a basketball.

The artwork was done by Gabz, you can find it here: http://www.rareink.com/larry-bird-art-jumpshot-by-gabz.html
Posted by Wade Forrester at 1:05 AM