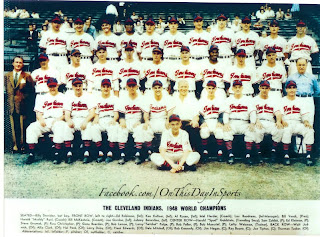 On August 12, 1948, the Cleveland Indians bounced back from an 8-4 loss in the first game of the doubleheader at Sportsman's Park in St. Louis, with a 26-3 beatdown of the St. Louis Browns. The Indians fell just one run short of tying their franchise record of 37 runs in one game that they had set 25 years earlier. 14 men got a hit for the Tribe which set a major league record for most men with a hit in one contest. Every single man that got an at bat for the Indians picked up a hit in the contest and four home runs were hit by the Indians. Pitcher Gene Bearden,  catcher Jim Hegan, and outfielders Walt Judnich and Larry Doby all went yard as they obliterated the Browns. Despite the huge win the Indians fell out of first place for the first time since August 2nd. In early September they found themselves four and a half games out of first then fought their way back into it and won the American League pennant after knocking out the Boston Red Sox in a one game playoff. The team then went onto win the grand prize after knocking out the Boston Braves in 6 to become World Champs. I bet the people in Boston loved them that year.

Check out the box score: http://www.baseball-reference.com/boxes/SLA/SLA194808122.shtml

You can check out the most runs scored in a game here: http://mlb.mlb.com/mlb/history/rare_feats/index.jsp?feature=most_runs_game
Posted by Wade Forrester at 12:45 AM