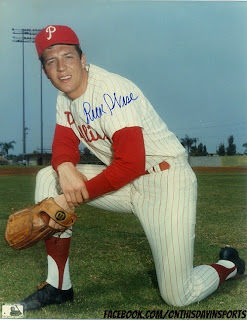 On August 28, 1971, Rick Wise of the Philadelphia Phillies struck out 11 men and led an offensive charge in a 7-3 win over the San Francisco Giants at Veterans Stadium in Philadelphia. Wise not only got man after man to swing and miss he also knocked in 5 runs with two home runs. His first was a solo shot in the fifth and his second was a grand slam in the seventh that drove a nail in the Giants' coffin that day. Wise, who is best known for being the man that brought future Hall of Famer Steve Carlton to the City of Brotherly Love when he was traded to the Cardinals in '72, was a pretty damn good hitter as well as a solid pitcher. In his years in Philly, he was no slouch at the plate. He hit .218 as a batter for the Phillies and hit 11 home runs wearing that uniform. While they aren't eye popping numbers they are pretty solid for a pitcher. From 1967 to 1971, Wise consistently hit .200 or higher. From a power standpoint the '71 campaign was his best at the dish, he hit 6 home runs total with two of them coming on that day at the Vet. Wise finished that season with 17 wins which included a no-hitter.

Check out the box score: http://www.baseball-reference.com/boxes/PHI/PHI197108282.shtml
Posted by Wade Forrester at 12:23 AM