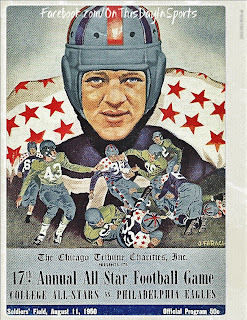 On August 11, 1950, with 88,885 fans on hand at Soldier Field in Chicago, the College All Stars stunned the NFL Champion Philadelphia Eagles with a 17-7 victory behind an outstanding effort from All American Charlie "Choo Choo" Justice. The All Stars scored first, on a 7 play 54 yard drive that featured  a 31 and a 12 yard run by Justice before fullback Ralph Pasquariello punched it in at the goalline.  The second touchdown for the All Stars proved to be the one that put them over the top, it came in the second quarter after quarterback Eddie LeBaron found a way to make a play as defenders were about to take him down. The quarterback wrestled his way free from defenders twice, on the second time he found a wide open Justice who took it to the house for a 35 yard touchdown that put the All Stars ahead 14-0 in the second quarter. Running back Steve Van Buren finally put the Eagles on the board in the fourth, but it wasn't enough to take away the victory from the Collegians. The College All Star game was an annual event that was played in Chicago, it featured some of the best the college ranks had to offer in a matchup against the defending NFL Champs. The game was played every year from 1934 until 1976, although a strike did end up cancelling the '74 event. It came to an end becasue the coaches were worried that their players might be injured, with the cost of athletes on the way through the roof they had to protect their investments so it went to the wayside. The pros won the contest 31 times while the collegians won it just 9 times and tied it twice. It had to have been quite the thrill for those kids in the those 9 victories over the pros, they had to be on top of the world.

This is a link to a newspaper article from the day after the 17th annual College All Star Game in Chicago:
http://news.google.com/newspapers?id=sxENAAAAIBAJ&sjid=PWoDAAAAIBAJ&pg=3779%2C2576715

Posted by Wade Forrester at 1:56 AM