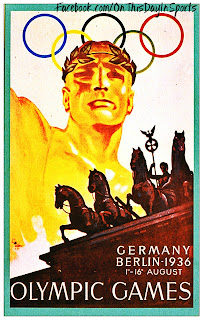 On August 14, 1936 , the United States Olympic Basketball team claimed the first ever Gold Medal for the sport by knocking off Canada by the score of 19-8. It was an odd contest, the game was played outdoors on a dirt court while it was pouring down rain which led to the low scoring affair. Twenty three nations entered the competition making it the largest team sport in the Olympics. The game being played outdoors was an experiment that in the end proved to be an experiment that should have never happened as rain hampered the gold medal contest. Of course it was a different game back then so most scores were far lower than what we see today. The United States squad beat the Phillipines 56-23, then downed Mexico 25-10 to setup a trip to the first ever gold medal contest in basketball history. After the United States won, the players were awarded their medals by none other than the inventor of the sport James Naismith. Naismith invented the sport in 1891, then started the first ever basketball program at the University of Kansas. As the sport evolved the Olympic committee took notice, it was first picked up as a demonstration sport in 1904 then it was finally added as an official event more than 30 years later in the '36 games. It was a crowning achievement for Naismith to see countries from all over the world playing the game he had come up with so many years before, he called it the greatest compensation he could have ever received for his invention. Fittingly he was there to hand out the medals to the respective winners, while the Americans took home the Gold, Canada took home the Silver, and Mexico took home the Bronze.