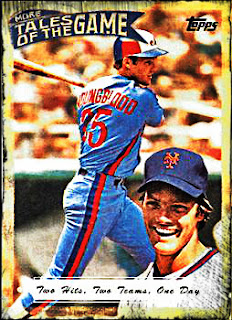 On August 4, 1982, Joel Youngblood became the first and only player in the history of Major League Baseball to pick up a hit for two teams in two different cities one day. Youngblood started the day as a member of the New York Mets, the club was in Chicago to take on the Cubs and Youngblood was batting 3rd in the lineup. In his second at bat of the game he knocked in two runs with a single off of  Ferguson Jenkins, before being replaced by Mookie Wilson after the third inning ended. The Mets skipper George Hamberger told Youngblood he was being shipped to the Montreal Expos and had to jump on a plane headed for Philadelphia where his new club was taking on the Phillies. The Mets did go onto win 7-4 with a little help from the newest Expo. It didn't take long for Youngblood  to make his presence known with his new team, he was called into the game in the seventh inning and picked up a single off of Steve Carleton. The Expos ended up losing 5-4, however, Youngblood's single was a history making moment. The fact that he picked up both hits off of two future Hall of Famers makes it just a bit more remarkable. Youngblood was a .265 career hitter who bounced around a bit throughout his 14 years in the big leagues. While his career did not end in Cooperstown he will always have the distinction of picking up a hit for two teams in two different cities in one day. Definitely a pretty interesting day in the life of a ballplayer.

Here's the box score for Youngblood's game with the Mets: http://www.baseball-reference.com/boxes/CHN/CHN198208040.shtml

Here's the box score from his game with the Expos: http://www.baseball-reference.com/boxes/PHI/PHI198208040.shtml