August 9, 1963: Roger Craig Changes Numbers To Get a Losing Monkey Off His Back 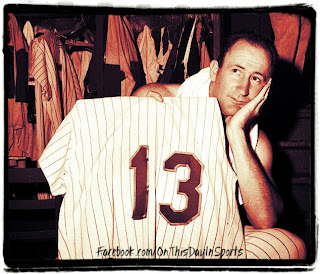 On August 9, 1963, at the Polo Grounds in New York, Roger Craig made a desperate attempt at changing a run of bad luck by changing his uniform number from 38 to 13. The Mets starter was one loss shy of the major league record of 19 consecutive losses in a row which led to the desperate measure. It looked like it worked for him in the bottom the ninth when Jim Hickman hit a walkoff grand slam off of Chicago Cubs reliever Lindy McDaniel to put the Mets in the win column with a 7-3 victory. A jubilant Craig said "It's over. Oh man. It's over." Craig might have had a few things working for him in that ninth inning, his manager Casey Stengel got in on the action by waving crossed fingers at McDaniel in an effort to hex the pitcher, meanwhile Craig's wife sat in the stands knitting furiously, whatever works I guess. I know I have done some crazy things during a ballgame hoping it would help align stars in the universe, I even think it might have worked a few times. Do you have any crazy sports superstitions?