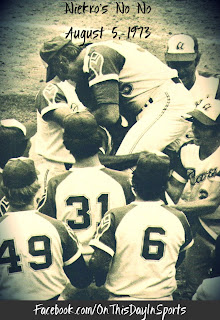 On August 5, 1973, at Fulton County Stadium in Atlanta, Georgia, Phil Niekro pitched the first no hitter for the Braves organization since the team moved to Atlanta.The knuckleballer had it working that night and so did his offense as they scored 9 runs against the Padres, while Niekro baffled batter after batter. Niekro fanned 4 men and walked 3 while two more reached on throwing errors by his teammates. The bid for a perfecto was broken up way early with a second inning walk but that didn't stop the Braves hurler from thinking about the possibility of a no no. He didn't think his chances were good since there hadn't been one for the club since the team moved, especially with the fact that he was in a hitter friendly park that the ball was flying out of on a  pretty consistent basis. On this day Niekro not only kept it in the park he kept the Padres from recording a hit and made history in Atlanta. It was the first no hitter for the franchise since Warren Spahn accomplished the feat with the Milwaukee Braves. Since that day the Braves have picked up a combined no no in 1991, then in 1994 Kent Mercker accomplished the feats against the Dodgers in Los Angeles, Mercker also started the '91 combined no no.  Niekro spent 21 years in a Braves uniform, 268 of his 318 wins came with that uniform on. The 5 time All Star had his # 35 retired by the organization in 1984, then in 1997 he found his way into baseball immortality when he was inducted into the Baseball Hall of Fame in Cooperstown, New York.

Here's the box score: http://www.baseball-reference.com/boxes/ATL/ATL197308050.shtml
Posted by Wade Forrester at 1:09 AM