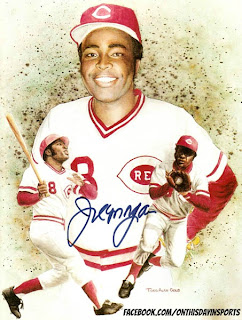 On August 27, 1978, Cincinnati Reds legend/second baseman Joe Morgan parked his 200th home run over the wall at Riverfront Stadium in Cincinnati. The solo shot off of Chicago Cubs hurler Mike Krukow tied the ballgame at one in the third inning but it wasn't enough for Morgan's Reds to pull off a victory. The Cubs scored a run in the fourth, three in the seventh, and two in the ninth as Krukow went the distance and came away with a 7-1 win. The home run by Morgan also made him the first man to achieve 200 bombs and 500 stolen bases in a career. The Hall of Famer finished with 268 career home runs with his first coming on May 8, 1965 and his last coming on July 31, 1984, he also stole 689 bags in a career that included 10 All Star appearances, 5 Gold Glove Awards, as well as 2 World Series Championships.