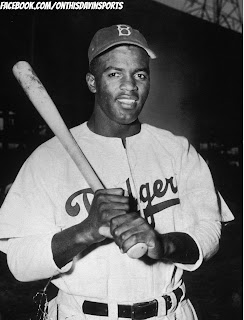 On August 29, 1948, in the first game of a doubleheader in St. Louis, Jackie Robinson of the Brooklyn Dodgers hit for the natural cycle in reverse during a 12-7 win over the Cardinals at Sportsman's Park in St. Louis. Robinson's day started off with a 2 run home run in the first, he followed it up with a leadoff triple in the third, then a double in the fourth, before completing the rare feat with a one out single in the eighth. The 4 for 6 performance ended with the two ribbies and three runs scored for the man that broke baseball's color barrier just one year before. The hot hitting continued for Robinson in the second contest as well, Jackie went 2 for 4 and scored a run in the contest that would take the Dodgers 10 innings to knock the Birds off 6-4. By the end of that day he had 6 hits in 10 at bats and had hit a natural cycle in reverse, which is just one of many accomplishments in the storied career of Jackie Robinson.