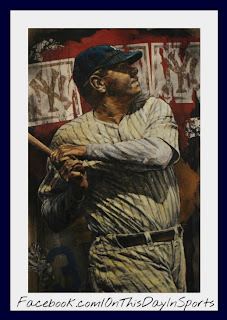 On August 21, 1931, Yankees slugger Babe Ruth knocked the 600th home run of his career in an 11-7 win over the Browns at Sportsman's Park in St. Louis. With the Yankees already leading 1-0 and a man on, Ruth knocked George Blaeholder's pitch clear out of the yard where it bounced off a car across the street. The fans in St. Louis had seen Ruth's power in the past, he muscled up for three home runs in Game 4 in the '26 World Series against the Cardinals, then he did it again in the final game of the '28 World Series.  When his career came to an end The Great Bambino had parked 58 of his 714 home runs over the wall at Sportsman's Park.

The artwork was done by Stephen Holland, you can find more of his great work here: http://atkinsonfineart.com/BrowseCatagArtist.php?CatID=8&CatName=Baseball&ArtistID=3