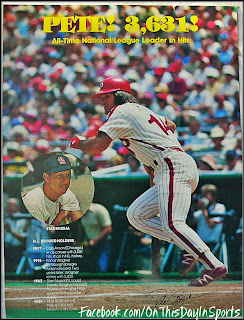 On August 10, 1981, with Stan Musial in attendance at Veterans Stadium in Philadelphia, Pete Rose became the all time hits leader in the National League. Musial had held the title since September 29, 1963 when he knocked his 3,630th hit passed a 22 year old rookie second baseman from the Cincinnati Reds by the name of Pete Rose. Rose tied Musial's record on June 10th then the season came to an abrupt halt just a couple day later due to a disagreement over player compensation for free agents. The dispute was finally resolved in late July and players returned to the field on August 10th. More than 60,000 packed the house in Philly to witness history, coincidentally the Philles were set to play the Cardinals and it would set up for a magic moment in the eighth when Rose singled through the hole at short. The crowd gave the new National League hit leader a long standing ovation while Stan ran out to congratulate him. The Phillies dropped the game to the Redbirds 7-3, however, history had been made. The man they called "Charlie Hustle" spent his first 16 years in Cincinnati. After being named rookie of the year in 1963 he only got better, he became a perennial all star and won three National League Batting Titles before leading the Big Red Machine to back to back titles in 1975 and 1976. When he left as a free agent in 1978, Rose had 3,164 hits under his belt and had a lot of ball left to play. In 1980, the 37 year old Rose helped lead the Phillies to their first championship and would continue to put up solid numbers as he approached the all time record for a National Leaguer. After he surpassed Musial the hits kept coming for Rose, in 1985 he recorded his 4,192nd hit to become the all time hit leader. He finished his career with 4,256 and is currently #1 on the list.

If you want to check out some badass numbers check out Pete's numbers: http://www.baseball-reference.com/players/r/rosepe01.shtml