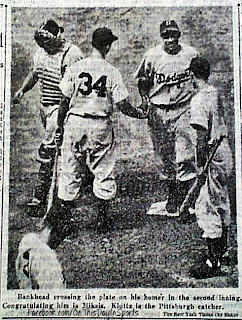 On August 26, 1947, Dan Bankhead of the Brooklyn Dodgers, became the first African American to pitch in a game in the major leagues when he was called into relieve Hal Gregg in the second inning of a game against the Pirates at Ebbets Field in New York. It was a rough day for Bankhead and the Dodgers, when he heard his number called the team was already down 4-0 and had two men on base. By the time the top half of the second inning came to and end the Pirates had added four more runs to their total and they weren't done. Bankhead was more than the first African American pitcher to take the mound, he was also the first African American pitcher to hit a home run. He accomplished that with a two run shot in the bottom of the second in his first major league at bat. It was the only home run of his career. Unfortunately for him he got rocked after pitching a scoreless third and fourth. The fifth was a whole different story, he would face eight batters and only retired one of them before being yanked. he had given up 10 hits and was charged with 8 runs. The Pirates weren't done, after Bankhead was pulled, they added two more runs to the board and would end the day with a 14-3. While it might have been a rough introduction to the majors it was an accomplishment not just for himself but for his race that had been unjustifiably kept from playing with their white counterparts before his teammate Jackie Robinson broke the color barrier earlier that season. Bankhead didn't have the career in the majors that Robinson or many of the other African American players did, which is why many don't know his name. In fact, Bankhead only made three more relief appearances during that '47 season. He did make an appearance Game 6 of the World Series as a pinch runner. It was a series that the Dodgers lost to the Yankees but it was an experience that most men can only dream of living. Over the next couple of seasons Bankhead pitched in the minor leagues, he was pretty damn good but a bit wild as he had problems putting men on via the walk. In 1950, Bankhead got another shot at the major league roster, he made 12 starts and appeared in 41 games as he posted a 9-4 record. They were the only 9 wins of his major league career. It came to an end the following season after appearing in just seven games. His career numbers will never put him in the Hall of Fame, which in the end hardly matters. He was a pioneer that helped pave the way for many men after him.

If you would like to read more about the life and career of Dan Bankhead check out this artiicle published by SABR: http://sabr.org/bioproj/person/62db6502 his career in the majors might have came to an end but his career in baseball did not.

Here is a link to the SABR Facebook page, give it a"like" they publish all kinds of great bios from the past.
https://www.facebook.com/pages/Society-for-American-Baseball-Research-SABR/79619821544