August 6, 1926: Gertude Ederle Becomes The First Woman To Swim Across The English Channel 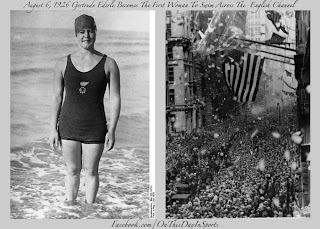 On August 6, 1926, Gertrude Ederle became the first woman to swim across the English Channel. The 19 year old New York native was more than just the first woman to accomplish the feat, she did it faster than any man that came before her, as she completed the swim in 14 hours and 31 minutes. The previous record was held by an Italian swimmer by the name of Sebastian Tirrabocchi who had swam from France to England in 16 hours and 23 minutes, making Ederle's swim that much more impressive. Ederle had a tug boat with some family as well as her trainers aboard following her as she swam her way into the history books. It took sheer determination for here to complete her journey, several times throughout her trainer wanted her to come out but her father and sister encouraged her to keep going. Thousands gathered on the shore in Kingstown, England as the young American girl made it after more than 14 hours of fighting the sea, it took everything she had to complete the historic swim. Hundreds of people gathered around her as she walked ashore she was met by an immigration officer who asked for her passport before she was able to even hug her father as she had just made history. Only 5 men had swam the channel before Ederle completed the historic swim, her record stood until 1950 when Florence Chadwick swam the channel in  13 hours and 20 minutes. The record has been broken many times since then, but nothing will ever change the fact that Trudy was the first woman to complete the feat. Ederle was treated like a true American hero when she arrived back in the States, more than two million people lined the streets of New York as they threw her a ticker tape parade to celebrate the historic swim.

This story appeared in the New York Times after Ederle's Swim:  http://www.nytimes.com/packages/html/sports/year_in_sports/08.06.html
Posted by Wade Forrester at 8:51 AM