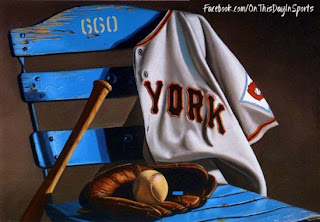 On August 17, 1973, New York Mets slugger Willie Mays hit the 660th home run of his career, it proved to be the last home run for the legendary slugger. The shot came off of Cincinnati southpaw Don Gullet  in the fourth inning at Shea Stadium in New York. It was a solo blast that put the Mets ahead 1-0, unfortunately for Mays and teammates it was a lead that they would not hold onto. Johnny Bench tied it up with a ninth inning blast then Hal King hit another solo blast that led to the Reds winning in the tenth. When he found his way to the big leagues in 1951, the 20 year old  kid didn't get a hit in his first twelve at bats. In his thirteenth at bat he hit the first long ball of his career, it came off of Braves hurler and future hall of famer Warren Spahn. From there Mays became a legend, he helped the Giants win the World Series in 1954 and became one of the best in the game at a rapid rate. The man they called the "Say Hey Kid" topped the 30 home run mark 11 times and the 50 mark twice. He not only was one of best to swing a bat his defense was legendary. He earned 12 gold gloves and took home the National League MVP award twice. Mays became a popular figure in New York before the team shifted to San Francisco in 1958, after spending more than 20 years in a Giants uniform he was traded to the Mets in the Spring of '72. While he was well past his prime he hit the last 14 homers of his career with a Mets uniform on. The Mets went onto the World Series in '73, Mays got just two hits in seven at bats as they lost the Oakland A's on seven games. After the season ended the 42 year old Mays announced he was retiring, he finished his career with a .302 average along with the 660 home runs. He is currently 4th on the all time home run list.