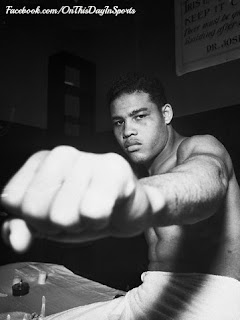 On August 30, 1937, after being postponed for four days due to rain, more than 50,000 people packed Yankee Stadium to watch the Heavyweight Champion of the World "The Brown Bomber" Joe Louis defend his title against Tommy Farr. The fight was originally set to be held four days earlier. Louis had knocked out 8 of his last 9 opponents and was considered a clear cut favorite in the match. However, the boxer from Wales put up true fight and took Louis the distance before losing to the champ by a narrow decision. Many thought that Farr had gotten the best of the champ and when it was announced that Louis had won boos rang out in New York. To make matters worse the referee initially raised Farr's arm in victory, the ref would later apologize for his mistake but it wasn't much of a help the day of the fight. While a lot of people thought Farr was robbed of a victory he didn't see it that way, he believed Louis beat  him fair and square, Farr even said "Every time I hear the name Joe Louis my nose starts to bleed." Louis did tip his cap to his opponent, he said I thought I had him but he would not be finished." Farr made him work to retain the title which earned Joe's respect. Louis would knock out his next 7 opponents which is a testament to how tough of a fight Farr was for him.

You can read a great round by round account of the bout here: http://www.boxinggyms.com/news/louis_farr1937/standard_louis1937.htm

This is Joe Louis' account of the fight: http://www.boxinggyms.com/news/louis_farr1937/standard_louis1937louis.htm
Posted by Wade Forrester at 12:02 AM