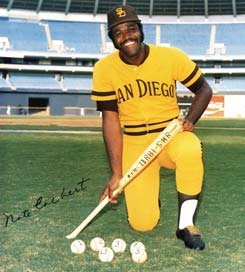 On August 1, 1972, San Diego Padres first baseman Nate Colbert hit 5 home runs and drove in 13 during a 7 for 9 performance in a 9-0 and 11-7 doubleheader sweep of the Atlanta Braves at Fulton County Stadium. Only one man has equaled the five home runs in a doubleheader and that was the one and only Stan The Man Musial. A native St. Louisan, Colbert witnessed Stan's record setting day on May 2, 1954 when he was just an 8 year old little boy at Sportsman's Park in St. Louis. Colbert started the first game of the doubleheader with a 3 run blast in the first, he followed it up with a solo shot in the seventh as the Padres cruised to the 9-0 victory. After going 4 for 5 in the first game with 2 homers and 5 ribbies some might have thought it couldn't get much better in the second game but they were wrong. Colbert went 3 for 4 in the second game with 3 bombs and 8 ribbies. The first bomb came in the 2nd inning, it was a grand slam that opened up a 7-0 lead over the hometown Braves. Atlanta plated a run before Colbert struck again, this time it was a two run shot to open up a 9-1 lead. While Colbert was acting like a one man wrecking crew the Braves fought back and by the time the ninth rolled around they had closed the gap to 9-7, then the one man wrecking crew wrecked them one last time. With two outs in the top of the ninth he got a hold of his 5th home run of the day the two run bomb made history as it sailed over the wall as he had just matched his childhood hero's record of 5 homers in a doubleheader. Colbert's 13 ribbies and 22 total bases broke Stan's records that he had set 18 years earlier. When Colbert witnessed Stan's heroics he turned to his dad and said "That's what I want to do when I grow up" he was one kid that accomplished his dream.

Here's the box score for the first game: http://www.baseball-reference.com/boxes/ATL/ATL197208011.shtml