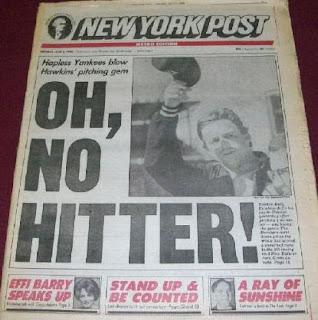 On July 1, 1990, Andy Hawkins of the New York Yankees no hit the White Sox at Comiskey Park but still lost the game. Hawkins was a victim of brutal defense that led to 4-0 win for the Sox. The defensive meltdown by the Yankees started in the eighth, with two outs Sammy Sosa hit a grounder down the third base line that was mishandled by Mike Blowers. Hawkins walked the next two batters  to load'em up, then Robin Ventura lifted a lazy fly ball into left that looked like a rally killer, not quite. Jim Leyritz misjudged the ball and it went off his glove, from there the wheels fell off the bus as the three baserunners came flying around to score. Hawkins' pain wasn't over just yet, another lazy fly ball came back to haunt him, this time it was a shot to right by Ivan Calderon that Jesse Barfield dropped, it brought Ventura into score. Scott Radinsky set down the side in order in the top of ninth to secure the W for the White Sox, while Hawkins sat in the Yankees dugout shellshocked by what had happened. A year later, Major League Baseball took away Hawkins' no hitter as they had redefined as an official no hitter as "one in which a pitcher or pitchers complete a game of nine innings or more without allowing a hit, so not once but twice did Hawkins lose the no no. Heartbreaker.

Check out the box score: http://www.baseball-reference.com/boxes/CHA/CHA199007010.shtml
Posted by Wade Forrester at 12:12 AM