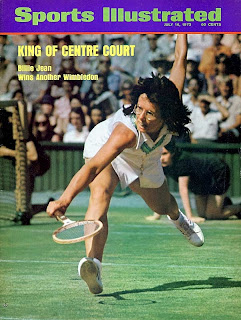 On July 7, 1973, Billie Jean King beat Chris Evert in straight sets to take home the Wimbledon singles title for the eighth time in five years. King was a seasoned 30 year old veteran at that point while her opponent was an up and coming 18 year old kid who had a very bright future ahead of her. King's dominance at Wimbledon began with three consecutive singles titles from 1966 to 1968 then would take the title in '72 before the '73 victory over Evert and then again in 1975. Wimbledon was a special place for King, it was a place she dreamed of playing at while growing up. Then would not only realize her dream she would win a record 20 career titles at tennis' most famous court, six singles, ten doubles, and four mixed doubles. Evert would have her own success at Wimbledon after the '73 defeat she came back in '74 and took the title, she would win it two more before it was all said and done. King won her final singles title at Wimbledon in 1975, her career at that court alone helped make her a legend in the world of sports.

Watch the match here: http://www.youtube.com/watch?v=3OIi7_SMcx8
Posted by Wade Forrester at 1:19 AM