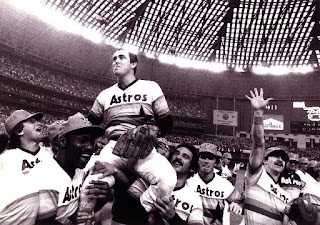 On July 11, 1985, at the Astrodome in Houston, Nolan Ryan became the first player in the history of Major League Baseball to strike out 4,000 men as his Astros beat the New York Mets 4-3 in 12 innings.  Ryan came into the game 7 strikeouts away from the historic milestone and would reach it in the top of the sixth inning when he set Danny Heep down with a strikeout, a two minute standing ovation by fans and teammates acknowledged what The Ryan Express had just accomplished. Ryan's day on the mound came to an end in the 7th he left the contest with the score knotted at 3, he had struck out 11 men on the day. Ryan's first strikeout came on September 11, 1966, he fanned Atlanta's Pat Jarvis to begin a long run of frustrating batters. Only 3 other men have reached the 4,000 plateau. Ryan is the only man to reach the 5,000 strikeout mark which he did in August of 1989. He finished his career with an eye popping 5,714 strikeouts, Randy Johnson sits behind him on the All Time K list with 4,785.