July 8, 1941: Ted Williams Wins The All Star Game With a Walkoff 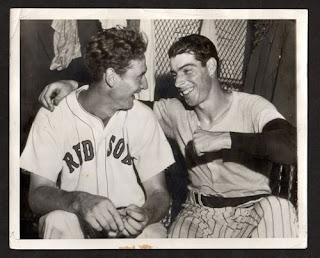 On July 8, 1941, Ted Williams led the American League to victory in the All Star game with a two out three run home run to give his squad a dramatic 7-5 victory at Briggs Stadium in Detroit. The National League looked to have control as Pittsburgh's shortstop Arky Vaughn blasted two home runs that helped them carry a 5-2 lead as they headed into the eighth inning. The A.L. got a run back in the eighth when Dom Dimaggio knocked his older brother Joe in to cut the lead down to two. The fateful bottom of the ninth started with a quick out, from there things didn't go the direction of the National Leaguers. A walk and two singles later the bases were jammed and the American League had their backs against the fences. Joe Dimaggio stepped to the plate with hopes of keeping the rally going when he hit in what looked like a sure double play that would have ended the game, the ball was mishandled by Brooklyn's Billy Herman as he made a wide throw to first that ended up giving Dimaggio a rbi and kept the game alive for the one and only Splendid Splinter Ted Williams. Williams ran the count to 2-1 before he pounced on the pitch that would win it. It was a shot to deep right that he immediately knew had just won the ballgame as he rounded first he had a little skip in his step and was clapping his hands as he rounded the first base bag. It was a heartbreaker for the National League, however it added another chapter to the legendary career of Ted Williams who was one of the greatest to ever play the game.