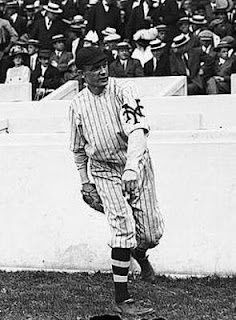 On July 3, 1912, in a battle of lefties at the Polo Grounds in New York, Rube Marquard set a modern day record as he picked up his 19th consecutive win of the season as his Giants beat the Brooklyn Dodgers 2-1. To date no other pitcher has recorded more consecutive wins in a single season. The road to 19-0 was due in large part to great run support as the Giants averaged nearly 7 runs per game in the 18 starts before he picked up his record setting 19th win. Things tightened up a bit in June for the hurler, after the team scored 3 runs or more in his first twelve starts the bats cooled off. Four of his last six wins were by one run and the Giants won the fifth by two. The 19th consecutive win did not come easy, Marquard gave up nine hits and the Dodgers had baserunners in every inning except one. Marquard worked his way out of jam after jam as he frustrated the Brooklyn squad who could only scratch a run across as they left 14 men stranded on the basepaths, twice they had the bases loaded but just couldn't get the job done when it counted. The opposing pitcher Nap Rucker was much sharper than his counterpart as he only gave up four hits but still surrendered two runs, it would be all that Marquard would need to make history. The streak would come to an end on July 8th as he lost to the Cubs, however his record has stood the test of time. Marquard and the Giants would go onto meet the Boston Red Sox in the 1912 World Series, despite two complete game wins by Marquard the Giants lost the series in a classic 7 game battle.