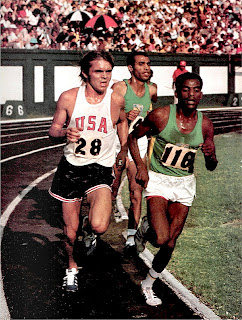 On July 16, 1971, at the Pan-Africa-U.S.A. International Track Meet in Durham, North Carolina, American Steve Prefontaine ran his way to victory after an unusual error by Ethiopian Mirus Ifter. Prefonataine and Ifter were in a thrilling battle in the 5,000 meters as they headed into the final two laps of the event when Ifter suddenly sprinted to a 100 meter lead and continued the pace as everyone in attendance at Duke University sat stunned. The the unthinkable happened, as the gun sounded to signal the final lap Ifter thought he won the race and threw his arms up in celebration as Prefontaine ran by him on the first turn. Prefontaine easily won the race while Ifter didn't quite know what had happened.  Ifter did not speak English which added to his confusion, he had never participated in a race that a gun signaled the last lap which led to the error that cost him a victory. It's the equivalent of a stock car driver doing a donut on the infield when he sees the white flag wave, gotta wait for the checkered flag.