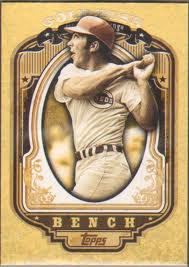 On July 15, 1980, in an 11-7 win over the Expos at Riverfront Stadium in Cincinnati, Johnny Bench established a new mark for home runs by a catcher when he connected for his 314th round tripper. The Reds catcher surpassed the one and only Yogi Berra. The blast came just two batters after George Foster broke a 4-4 tie with a 3 run home run of his own. Bench added two more runs to the board to cap off a 5 run inning for the Reds. Bench, arguably the best catcher the game of baseball has ever seen would finish his career in 1983 as the all time home run leader at the catcher position. He went yard a total of 327 times while he was the starting catcher and parked another 62 balls over the wall while starting at different positions. The 14 time All Star and 2 Time World Series Champ was not only known for the pop in his bat he also won 10 Gold Gloves on his way to establishing himself as one of the best to ever play the game.

Only Carlton Fisk and Mike Piazza have hit more home runs from the catcher position, here's a list of the all time leaders for dingers by a catcher: http://bb_catchers.tripod.com/catchers/careerld.htm
Posted by Wade Forrester at 1:08 AM