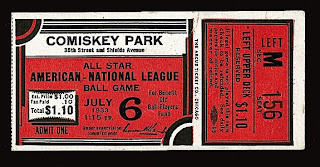 On July 6, 1933, the first ever Major League Baseball All Star game was played at Comiskey Park in Chicago and Babe Ruth stole the show. The game was billed as "The Game of the Century" as the greatest collection of baseball talent was together to play on one field. The American League took an early 1-0 lead after pitcher Lefty Gomez knocked in Jimmie Dykes in the second inning. The Sultan of Swat increased the lead to 3-0  in the third with a line drive two run shot off of St. Louis' Wild Bill Callahan, everyone in the park knew it was gone the moment it came off the bat. The only runs the National League could muster came in the sixth, after Pepper Martin knocked in a run on a sacrifice. Frankie Frisch parked one over the wall to narrow the score to 3-2. Earl Averill picked up an rbi single in the sixth for the American League which would prove to be the final run of the contest as Lefty Grove shut the door on the National League with three shutout innings to secure the 4-2 win. The Great Bambino not only helped lead his team to victory with his bat, he also helped with his glove, in the eighth Ruth made a spectacular catch after Chick Hafey smoked one to right that would have surely scored Franke Frisch from first. 47,595 souls witnessed this historic game in Chicago, the game was thought up by a sportswriter by the name of Arch Ward who had worked for the Chicago Tribune, he might not of knew it then but it was an idea that would land him a spot in the history of the great sport of baseball.

Check out the box score: http://www.baseball-reference.com/boxes/ALS/ALS193307060.shtml
Posted by Wade Forrester at 12:15 AM