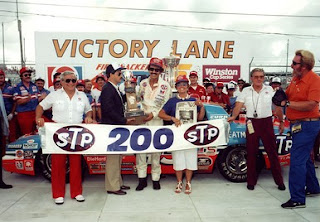 On July 4, 1984, "The King" Richard Petty added the 200th and final win of his career to his resume as he drove to victory lane at the Firecracker 400 at Daytona. More than 80,000 witnessed the historic victory by Petty who had sat behind the wheel of a stock car since 1959 when he was named NASCAR's rookie of the year, from there he developed into one of the most dominant drivers the sport has ever seen. He won the points championship a record seven times as he called victory lane his second home for more than 30 years. Petty always considered the July race at Daytona just another race, as the Daytona 500 was "the race", however, that July race in 1984 was more than just another race. With the President of the United States Ronald Reagan in attendance "The King" would ride to victory one last time, he would later say that winning in his last race in front of the President was his best memory at Daytona. Richard Petty's career came to an end after the 1992 season, he not only won the 200 races he finished in the top ten more than 700 times on his way to becoming a true legend in the sport of NASCAR. In 1992, he was awarded the Presidential Medal of Freedom only 20 other men from the world of sports have been bestowed that honor.

Happy 4th of July everyone, be safe and enjoy.
Posted by Wade Forrester at 1:46 AM