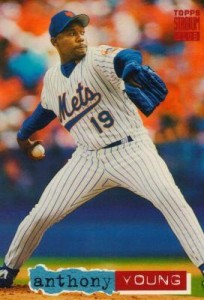 On July 28, 1993, one of the worst streaks in all of baseball came to an end at Shea Stadium in New York when Anthony Young picked up the win with a 5-4 victory over the Marlins. The hard luck hurler pitched in 74 games between April 19, 1992 before finally getting a decision that night at Shea. It appeared he would suffer his 28th loss in a row when he surrendered a ninth inning run that put the Fish up 4-3, then Young's teammates came through for him in the bottom of the ninth. Jeff McKnight led off the bottom half of the inning going for a pinch hit single. After he was moved over to second on a sac bunt, Ryan Thompson took Young off the hook by knocking in McKnight with a single. Two batters later Eddie Murray hit a line drive walk off double to right that brought Thompson into score. He was mobbed by his teammates as his nightmare came to an end, "The guys treated it like I had won a World Series game for them" he was given a bottle of champagne by his skipper Dallas Green  as they celebrated the end to the streak that no player would ever want to be a part of. Young's losing streak had surpassed Cliff Burton's mark of 23 straight losses as  a member of the Boston Braves in 1910 and 1911. During the losing streak Young did convert 12 consecutive saves but was still in search of the elusive win until he finaly picked it up on that night in New York.

Here's the box score: http://www.baseball-reference.com/boxes/NYN/NYN199307280.shtml
Posted by Wade Forrester at 3:40 AM