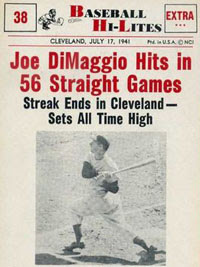 On July 17, 1941, one of the most famous streaks in sports came to an end in Cleveland, Ohio, when Joltin Joe DiMaggio's 56 game hitting streak was snapped as the Yankee Clipper went 0 for 3 in front of more than 67,000 at Cleveland Municipal Stadium. The streak began with a single and an rbi against the Chicago White Sox on May 15, 1941, he then went on a tear that might not ever be matched. Over the next two months DiMaggio hit .408 with 15 homers and 55 ribbies as he reached base in every single contest until that night in Cleveland. DiMaggio nearly got a hit in the first inning as he scorched one down the third base line that was backhanded by Cleveland's Ken Keltner who rocketed it over to first retiring him for the first time. After drawing a walk in the fourth he got another chance in the seventh but once again he hit it to Keltner who fired it over to first and set down the Yankees star.  Joe's final shot at 57 came in the eighth, he hit a hot shot up the middle that was snagged by Lou Boudreau who stepped on second then threw to first as he turned the double play and ended the record breaking streak that has stood as a record for more than 70 years. The Yankees did win the game 4-3, but it was probably a bittersweet win as the streak was over. Joe's 56th consecutive game with a hit came one day earlier, he went 3 for 4 with a double. Pete Rose's 44 game hitting streak in 1978 is the closest anyone has come to DiMaggio's record. It might never be broken.

JoeDiMaggio.com has a game by game account of the streak, it's really really cool. Here's Game 1 of the streak: http://www.joedimaggio.com/2012/05/11/joe-dimaggios-streak-game-1-a-single-against-the-white-sox-gets-it-rolling/ after you get done reading the account you can just click on the next one.