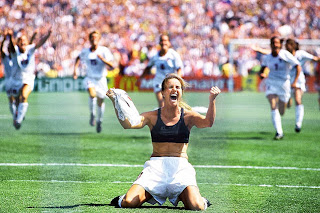 On July 10, 1999, more than 90,000 fans packed the Rose Bowl in Pasadena to watch the United States take on China for the Women's Wold Cup. It was a classic match that was tied after 120 minutes of regulation and overtime play, leading to a shootout that will never be forgotten. After both teams put the ball in the back of the net 4 times, the weight of the world was on Brandi Chastain's shoulders as she was a kick away from bringing the United States a World Cup championship. Chastain launched a shot into the upper right hand corner of the goal to win it for the United States. As soon as the ball hit the netting Chastain ripped her jersey off and fell to her knees as she was overwhelmed with pure joy before her teammates mobbed her. It truly was a great moment in sports.

Watch the goal and listen to Chastain reflect on it here: https://www.youtube.com/watch?v=HbTiiAtLXnE
Posted by Wade Forrester at 1:08 AM