July 25, 1956: Roberto Clemente Hits An Inside The park Walk Off Grand Slam 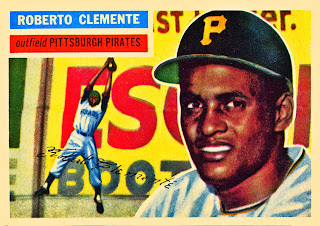 On July 25, 1956, in a 9-8 victory over the Chicago Cubs at Forbes Field in Pittsburgh, Pirates legend Roberto Clemente hit the only walk off inside-the-park grand slam in the history of Major League Baseball. The Pirates had held a 4-0 lead until the eighth, when the Cubs blew the doors open with a 7 run inning. The Buccos came back with a run in the bottom of the eighth, then the Cubs took that run right back in the top of the ninth. With the score 8-5 heading into the bottom of the ninth it looked like the Cubs just might get the W, until Turl Lown loaded the bases without even getting an out. That led to Jim Brosnan being called into the game to face the always dangerous Clemente. Brosnan threw only one pitch, Clemente lined it into left field and was off to the races.  As he came around third he flew through a stop sign and bolted toward home plate like a man on a mission. It was a mission he would accomplish, as he just beat out an Ernie Banks relay to the dish. As Clemente came sliding in he missed the plate then reached back and got a hand on it before a tag could be applied. The fans at Forbes Field went crazy as they had just witnessed something that not only had never been done before, it has not been done since. It goes to show you should always stay until the last out, you damn well know there were people walking to their cars when they heard the cheers of the walk off winner. While others have hit an inside the park walk off homer, not one of them has been of the grand slam variety. That would have been a great one to witness.