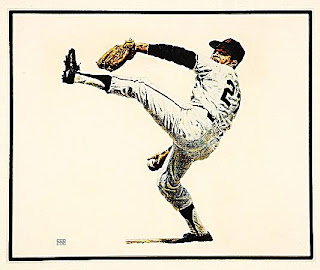 On July 19, 1960, in a 2-0 win over the Philles at Candlestick Park, future Hall of Famer and San Francisco Giants legend Juan Marichal allowed just one hit and struck out twelve in his major league debut. The young righthander with the distinctive leg kick and delivery won more games than any other pitcher in the 1960's. The Dominican born Marichal won 238 games over the next fourteen seasons in San Fran, only Christy Mathewson and Carl Hubbell have won more games with a Giants uniform on. One of the greatest highlights of his career came in June of '63 when he no hit the Houston 45's. Marichal became a perennial all star as he won 20 or more games 6 times, he also had two seasons in which he won 18 games. Marichal never did win a Cy Young award despite having numbers that would blow just about anyone away, unfortunately for him Sandy Koufax and Bob Gibson were just as dominant so he never did take home the hardware.The man that became known as "The Dominican Dandy" left San Francisco in 1973, he won 5 more games with the Boston Red Sox in '74 then retired after a cup of coffee with the Dodgers in '75.  Marichal was inducted into the Baseball Hall of Fame in 1983.