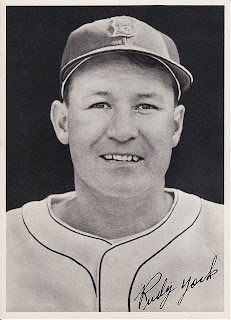 On July 27, 1946, Rudy York of the Boston Red Sox hit two grand slams in a 13-6 rout over the Browns in St. Louis. York was just the third player to accomplish the feat as he joined Jim Tabor and Tony Lazzeri in an exclusive club. Since that day at Sportsman's Park 10 other men have joined the two grand slam in a game club, no man has yet to hit three. The season York accomplished the feat was his only full season in Beantown. He parked a total of 17 balls over the wall that season and would help lead the club to the World Series. The two slams were not the greatest highlights for York during the '46 campaign. He hit a walk off homer in Game 1 of the World Series. Then hit another decisive long ball in the third game of the series, despite his heroics the Sox lost the the series in 7 games.

Here's the box score: http://www.baseball-reference.com/boxes/SLA/SLA194607270.shtml
Posted by Wade Forrester at 3:52 AM