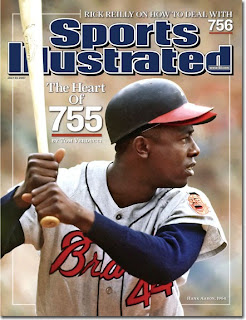 On July 20, 1976,  Hammerin Hank Aaron hit the 755th and final home run of his career off of California's Dick Drago in the 7th inning of a 6-2 Brewers win over the Angels in Milwaukee. Aaron broke into the league with the Milwaukee Braves in 1954, his first long ball came on May 23rd of that year, when he took St. Louis' Vic Raschi deep, coincidentally it was Raschi's last game in a Cardinals uniform. Aaron became a model of consistency as he recorded 15 seasons with 30 or more home runs on his way to becoming the all time home run leader. His first 398 home runs came in Milwaukee before the Braves moved in 1966. His next 335 came in Atlanta. On Opening Day in 1974, Aaron blasted the 714th home run of his career to tie Babe Ruth's all time record, 4 days after tying the Babe he surpassed him and became the all time home run leader. The '74 season was his last with the Braves, he had spent more than 20 years in the organization before being traded to the city in which it all started, Milwaukee. Aaron spent the final two years of his career with the Brewers, he hit 22 homers while he was with the Brew Crew with the most important one of them all coming on that July day in Milwaukee. The 755 stood as the all time record until Barry Bonds surpassed it in 2007, in the eyes of many the number 755 and the name Hank Aaron are still #1 on that list.

Posted by Wade Forrester at 1:33 AM