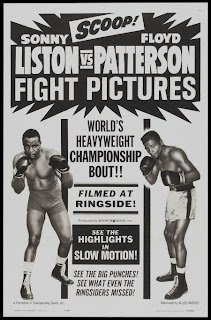 On July 22, 1963, Sonny Liston made quick work of Floyd Patterson in Las Vegas to retain the World Heavyweight Title. Liston had taken the title from Patterson in September of '62 with another first round knockout. The second fight was almost a mirror image of the first one as Liston got the job done in 2 minutes and 10 seconds, just 4 seconds slower than the first bout.  As soon the bell rang Liston was on the attack, within a minute Patterson had hit the deck he got up quickly but it didn't last long as Liston was absolutely pummeling him. After Patterson hit the canvas for a second time he sprung to his feet and was knocked back down in the blink of an eye, the fight was over and Liston was still the champ. It was a truly dominant performance.

You can watch it here: http://www.youtube.com/watch?v=HX4e18IhhTE